Home / The Middle East: On the edge of the abyss?

The Middle East: On the edge of the abyss? 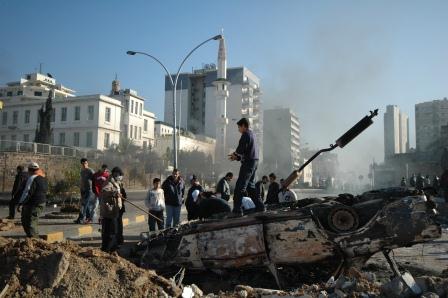 Countless times I've read analysis and the blurb on the back of books that the Middle East is ‘on the brink’, a ‘tinderbox’ ready to explode due to the nepotistic nature of governments and the dire economic conditions of much of the region. Now more than ever, these predictions look like they may be coming true - a dictatorial regime has fallen in Tunisia and another is tottering in Egypt.

Some of these analyses have predicted the imminent fall of the Middle East’s regimes and monarchies for the past four decades. A Middle East ‘spring’ was just around the corner, the people would rise up and the region’s overwhelmingly authoritarian regimes would no longer have their days in the sun. Democracy would prevail. There have certainly been many coups, the overthrow of kings and dictators, and – of course – wars since the region was cookie-cut into separate countries through the fall of the Ottoman Empire, before and after World War One.But that tinder box never exploded. It didn’t happen after the 1967 or 1973 wars between Arab states and Israel; it didn’t happen after the 1979 Islamic revolution in Iran; it didn’t happen following the 1990-91 Second Gulf war or the 2003 US-led invasion of Iraq; and it didn’t happen after the July 2006 war between Israel and Lebanon’s Hezbollah. The sparks that could have ignited the tinderbox were diffused, snuffed out by the internal security forces and outside meddling, and the malaise continued.But it would seem that these analyses forecasting the Middle East’s imminent explosion were premature. It has taken until now for the people to stand up en masse and say ‘kifaya’, ‘enough’ in Arabic – enough of high unemployment, corruption, cronyism, repression, phony elections, lousy education and low standards of living.Tunisia provided that spark. Following the successful ouster of Tunisia’s dictator Zine al-Abidine Ben Ali on January 17 after a month of nationwide protests, demonstrations have erupted in Algeria, Yemen and on a major level in Egypt. There have even been unprecedented protests in the Saudi coastal city of Jeddah over the government’s mishandling of the recent flooding there. Protests have also happen in Jordan, while in Lebanon – although not due to the ‘Tunisia effect’ – the government fell over ongoing political wrangling about the Special Tribunal for Lebanon that is investigating the assassination of former Prime Minister Rafik Hariri in 2005. These are tense and unpredictable times in the Middle East.The question that is on everyone’s lips is whether the protests will escalate throughout the region, and whether the ongoing protests will retain steam. In Egypt it is clear that even if President Hosni Mubarak survives this onslaught against his 30 year rule, it is over for his dynasty. His son has allegedly left Egypt and there is no way Gamal Mubarak will succeed his father. All Middle Eastern governments will have to make concessions to appease their people unless they want to go the way of Ben Ali. Indeed, oil-rich Kuwait distributed US$4 billion and free food for 14 months to its citizens to mark ‘national occasions’, although the unstated reason was clearly to shore up support for the monarchy.Meanwhile, the regional situation is causing havoc with regional stock markets and economic forecasts. Lebanon is not likely to have as successful a summer as last year, with 2.2 million visiting the country in 2010, due to the current instability. The same can be said of Egypt and Tunisia. Tourism aside, stocks markets have plummeted in Tunisia and Egypt, as elsewhere in the region, including the Gulf. Sovereign bond risk has also heightened and international investors are understandably hesitant to enter Middle Eastern markets. British investors are holding onto the seat of their pants, with British investment in Egypt the country’s largest foreign investor at some US$20 billion.This year has certainly started out with a bang in the Middle East, and we could all be in for a very interesting 2011. How it will all play out will be up to the people and the reaction of the region’s rulers, external forces like the United States included.  ENDS