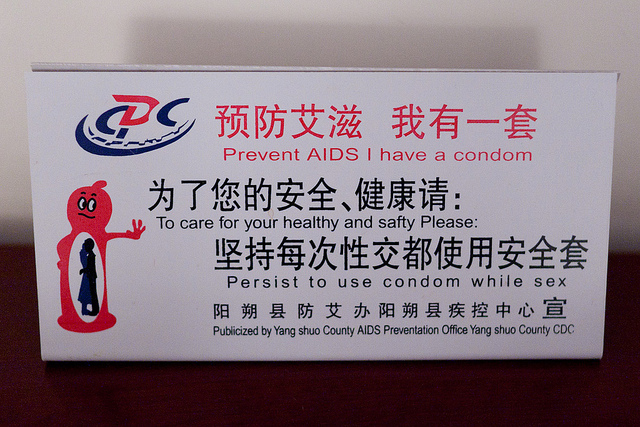 “How to Protect Myself” is a major topic in both books. In “Boys and Girls,” which is adapted from a German textbook, scenarios include a little girl being given candy by a stranger and a little boy being told by a male tennis coach to help him clean a locker room. “What should you do if you were them?” asks the textbook.

This is an important question as sexual abuse and harassment targeting young children has been increasingly reported in China. In November, a 54-year-old man who worked as a primary school teacher in a village in Hubei province was sentenced to 18 years in prison for sexually harassing and raping his students. In October in Sanya, Hainan province, a middle-aged male teacher harassed an eight year-old girl on a school bus.

Aside from self-protection, the two textbooks also explore topics like “Know your body,” as well as “Where am I from?” — a question that often embarrasses Chinese parents, whose answers are either “You will know later” or “You were picked up from the garbage.”

Joan Zhao, a mother of a 13-year-old daughter in Shanghai, explains, “I think sex education is vital because these days kids physically mature faster than our generation.”  She adds, “Kids are curious by nature, and if they don’t get the information they want, they turn to the Internet. I’d rather my daughter be guided by a professional rather than letting her blindly search online.”

For experts like Liu Yeping, a professor and psychologist at Shanghai Jiao Tong University, sex education in China has long been lagging behind the developed countries, and now it finally seems to be on the right track.

“In many Western countries, sex education starts as early as in kindergarten, because it’s not only about sex, but also about sexual ethics, respect, and how to behave, all of which are important to help the child grow into a responsible person,” she said.

China had avoided sex education for decades until in recent years when a class called, Sheng Li Wei Sheng, meaning physical health, was taught in Chinese middle and high schools. However, the chapter on sex education was usually omitted.

“That’s why the average quality of Chinese marriage is far from good, and the number of teenage pregnancies have been rising,” Liu said.

Since its founding in 2005, The Shanghai Teenage Pregnancy Help Center reports that it has helped more than 2,000 teenage girls get abortions. The youngest was only 12, and around a third of the young women had more than one abortion.  Nationwide, there are no official statistics.

While Liu agrees that China is making great progress by launching the education project, an equally great challenge is the shortage of qualified teachers.

“The program targets different age groups so the teachers have to use the proper approach specifically designed for the target. But in China, very few teachers think about it,” Liu said.

In fact, the Beijing textbook, which is edited by the Family Planning Association of Hong Kong, has been widely criticized by Chinese parents over the Internet because of the book’s detailed descriptions and illustrations of intercourse and physiology. Some said the book is like Japanese adult manga.

“I think it probably is better for older children in middle or high schools,” Liu said.

Joan Zhao, the mother in Shanghai, agrees. “I don’t think it’s necessary to show all the details to kids in primary schools, and the language should also be well-selected,” she said.